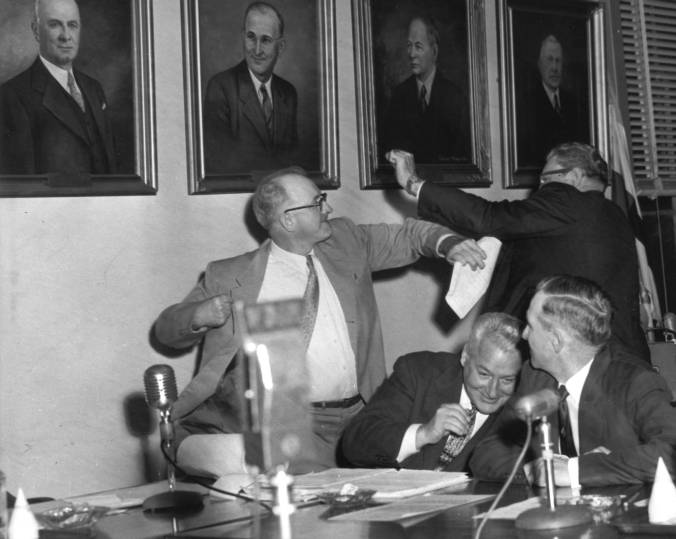 Knoxville is an odd little town. It has all the resources a city could hope for: a flagship university, a major waterway, and two nation spanning interstate highways. Yet decade after decade, it lags behind Memphis, Atlanta, and Nashville in terms of growth and development. The reasons for this are myriad and complex, but might be simplified to this; Knoxville has always been comprised of two competing factions, those who want change, and those who fight it. The innovators have always tried, by hook or by crook, to drag the traditionalists into modernity.

Understandably, the innovators always came from the wealthier more educated classes. They have always had the means to effect change, and no shortage of high profile advocates. The traditionalists typically came from the lower classes, the simple hillbilly folk whose roots ran deep back into the hills and hollers. They lacked the money or the means to compete with the wealthy innovators. They needed a champion. Enter Orton Caswell “Cas” Walker, champion of the hillbillies and foil of “The Silk Stocking Crowd.”

Last week Shopper News reran the great Betty Bean’s years old obit of Cas. Bean dubbed him, a “hillbilly colossus.” I’ve never heard it more aptly put. Coming from a family that has been in Knoxville since the dawn of time, I grew up hearing stories about Cas, but through the years I’ve realized most of my generation is totally ignorant of him and the legend that surrounds him.

In 1924, at age 21 Walker crawled out of a Kentucky coal mine and road the rails home to East Tennessee with years of hard earned savings in his pocket. He used the money to start a business, the first Cas Walker grocery store on Vine avenue in Knoxville. By the mid 1950s, Walker had nearly thirty stores in the surrounding area.

Walker built his grocery empire through marketing genius. He threw chickens off the roof. If you caught one, it was yours to keep and eat. He buried Digger O’Dell underground outside his Chapman Highway store for thirty days with a pipe running to the surface so customers could talk to him. According to the Knoxville Journal, one night  as many as 1,500 were on hand to witness the madness. When Walker denied O’Dell’s request to quit before the thirty days were up, O’Dell (from his underground home) called the local papers and health department claiming he was ill and needed medical care. Walker responded by placing two attractive women dressed as nurses on the scene to sell sandwiches.

His greatest promotional stroke of genius was a popular variety television show, showcasing local talent and promoting his store. He once famously warned shoplifters and thieves on air that he had security guards blanketing parking lots and stores ready to “whup the hell out of you and swear that you jumped on’m.” He continued “anybody’s invited to jump on me, I’m not afraid of any of you bastards.” Cas embodied the ferocious hillbilly spirit. He struck gold on his variety show with a little mountain girl from his hometown of Sevierville Tennessee, Dolly Parton, whose voice first became famous as the one behind Cas Walker Stores’ catchy jingle.

For thirty years Walker served on Knoxville’s city council. He was elected mayor in 1946, but removed from office a few months into his tenure through a recall vote forced by his many enemies on the city council. Rough and tumble Cas made the cover of Life magazine in what he later claimed was a posed photograph of him knocking the daylights out of fellow city councilman George Dempster at a council meeting. Dempster later said of Cas, “If I ordered a whole truckload of SOBs, and they just sent Cas, I’d sign for it.”

Through his position on the council and his newspaper, The Watchdog, Walker assaulted the silk stocking crowd and Knoxville’s upper crust. He fought off tax hikes and government growth. Some of his more questionable causes were his oppositions to fluoridated water and one metro-government.

Walker was aware of his shortcomings. Ever the savvy politician, in 1993 he called then twenty seven year old state house candidate Tim Burchett with an offer. “I can be for you or again you Tim, whichever you think will help more.” Walker continued, “They say you’re just like your daddy. I never could get him to do nothin’ crooked neither.”

Like most all political figures in history, Walker’s life and career are colored in shades of grey. He won and he lost. He erred and he righted. But through it all, without question, he served as the champion of a class of people without the time or money to fight for themselves. Cas was “one of us.” He gave voice to the silent majority, from Happy Holler to Island Home.

As Knoxville is inundated with microbreweries and credit card hippies, a Cas Walker sized holed is being illuminated in our community. Change and innovation are great, necessary in fact, but do we really want to become Nashville or worse yet Asheville? Knoxville should continue to develop and grow, but not to a point or in a way that betrays the character and identity of our scruffy mountain town.