It is indisputably a hard time to be a Tennessee football fan. There are not many positive factors to focus on within the program today, so instead lets harken back to better days and take a look back at the top 10 quarterbacks in program history.

Anytime a list like this is made, there will be disagreement. This list only factors in quarterbacks who played in the modern era of college football, (sorry Bobby Dodd) because quarterback was fundamentally a different position then than it is now. a variety of factors will be considered: wins, total yards, touchdown to interception ratio, and overall impact on the program. 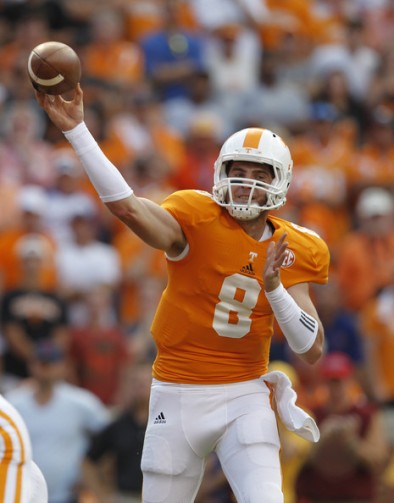 In his senior season as quarterback at Tennessee, Tyler Bray posted gaudy numbers: 3,612 yards, 34 touchdowns, and only 12 interceptions. However, he failed to put up the only numbers the ultimately count, the ones in the win column. Bray’s teams never finished above .500 in three seasons as Tennessee’s starting quarterback, and he was an even 14-14 as a starter. Beyond that, rumors of attitude problems and off the field issues dominated Bray’s tumultuous time on Rocky Top. In spite of his incredible senior season, Vol nation never really accepted Bray as one of its own. 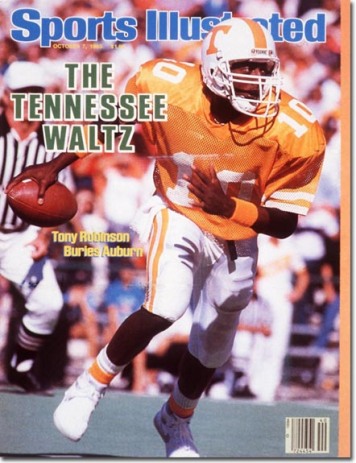 If you evaluate Robinson solely on the statistics listed above, he could only be considered an average, if not forgettable quarterback. However, football isn’t played on paper and the story of Tony Robinson is a complicated one. Upstart, phenom, rare talent, inconsistent, injury prone, crack addict, all of these describe Tony Robinson. Mid way through 1985 Tony Robinson was slicing through competition, setting single game school records, on the short list of Heisman Trophy finalists, and even featured on the cover of Sports Illustrated after embarrassing Bo Jackson’s Auburn Tigers. And then he got injured, and a shining star went black. Robinson went down in the third quarter of the Alabama game, and never returned. A few weeks later he was arrested and sent to prison for possession of crack cocaine. The 1985 Vols went on to win the Sugar Bowl without him. Robinson was a flash in the pan, and the advent of the pass happy west coast offense has wiped his name from the record books. But, for a brief moment, he was as spectacular as nearly any quarterback to ever wear the orange. 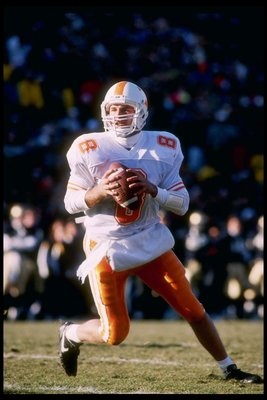 Andy Kelly did not put up the most impressive numbers from a passing standpoint as a three year starter at Tennessee. His 6,000 plus career passing yards are impressive, but his touchdown to interception ratio is downright atrocious. What Kelly did do is oversee the revival of Tennessee football. With Kelly at the helm, Tennessee began a streak of 9 plus win seasons that would last more than fifteen consecutive years. In both 1989 and 1990, Kelly lead the Vols to SEC championships. In 1991, Kelly lead the most famous Volunteer comeback in history, when he lead the Vols back from a 31-7 second quarter deficit against #5 Notre Dame. The Vols won on the road, 35-34, in what would come to be known as The Miracle at South Bend. Kelly ranks ahead of Bray and Robinson not because of his physical ability or measurables, but because of his leadership. 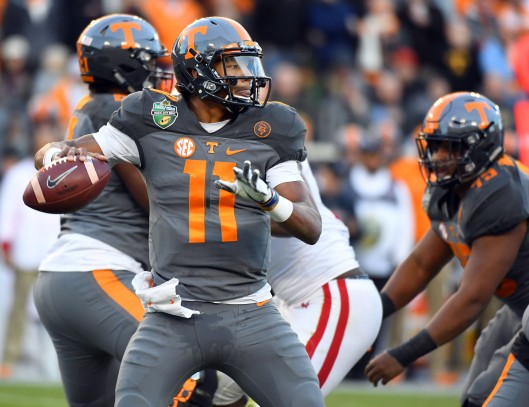 Joshua Dobbs is the hardest player to place on this list. Some think he should be in the top five, others say his unreal numbers are the byproducts of an up tempo high scoring offense. Dobbs was great, there is no questioning that. As the 2017 Vols flounder, one begins to wonder if Joshua Dobbs wasn’t so great that he was in fact succeeded in spite of Butch Jones all of this time. Dobbs is one of the only quarterbacks to play major college football and never have a full time quarterbacks coach. In spite of that, he posted impressive numbers in both his junior and senior campaigns. What prohibits him from climbing higher on this list is the fact that with only one more year as a starter, Dobbs only won 9 more games than Tyler Bray. 23-14 is simply not good enough to crack a top 5 all time list at Tennessee. 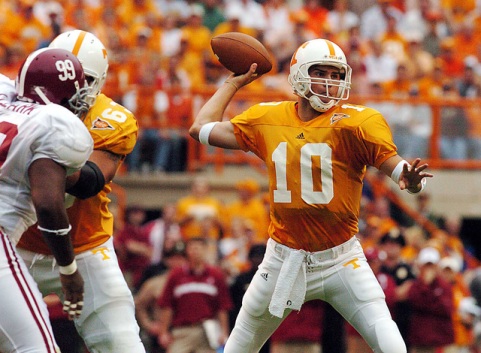 Ainge’s Tennessee career is divided into two sections B.C. and A.C; before Cutcliffe and after Cutcliffe. Ainge split time as a true freshman in 2004 with fellow freshman Brent Shaefer. Eventually Ainge won the job, beat Florida, and lead the Vols to their fourth SEC division title in 8 years. However, Ainge went down with an injury before the game could be played, and the Vols lost to undefeated Auburn. In 2005, injury riddled and inconsistent Ainge mostly watched from the training room as the Vols suffered their first losing season in over two decades. In 2006, coordinator David Cutcliffe made his return to Tennessee, and Ainge became the quarterback everyone had hoped he could be. That year he stayed healthy for almost the entire season, and set a school record for completion percentage in a season at 67%. In 2007, Ainge lead the Vols to the SEC championship game yet again, and he is the last Vol QB to have done so. Two late interceptions cost Tennessee the game to eventual national champion LSU, and Ainge graduated on a sadly sour note. The next season Phillip Fulmer was fired and Tennessee descended into a decade of abysmal football. 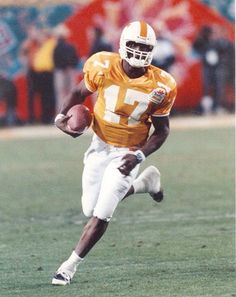 Some people will stop reading this at this point. Some consider it an abomination to exclude national champion Tee Martin from the top 3 in an all-time Tennessee quarterback ranking. Tee Martin had an incredible winning percentage, and did lead Tennessee to its first undisputed national Championsip in nearly fifty years. For that he cracked the top 5. If not for that, his numbers would dictate that he be ranked closer to the 7-8 range. Martin was a good quarterback on some great teams. He showed up big, and played consistently when the lights were on. While his 55.4 career completion percentage is nothing to brag about, Tennessee fans remember that he still holds the NCAA record for consecutive completions. Martin was an integral part of the greatest season in modern Tennessee football history, and for that he will never be excluded from a top 5 list. 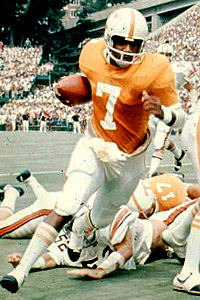 Condredge Holloway, better known as The Artful Dodger, broke the quarterback color barrier in the SEC. That alone is a fully suitable testament to his skill. Holloway oversaw a major decline in Tennessee football as Doug Dickey’s teams slowly faded and mediocre coach Bill Battle undertook the first major destruction of a Tennessee dynasty. Without Holloway’s sheer talent there is no chance the 1972 Vols would’ve have posted an impressive 10-2 record. Holloway, much like Dobbs, found success in spite of the talent around him, and a mediocre head coach. Until Dobbs, Holloway was also the most prolific runner the Vol’s had ever seen at quarterback. His numbers don’t seem so impressive now, but in an era dominated by defensive football, they were good enough for Holloway to finish with the best touchdown to interception ratio in school history. The 2 sport standout was also an All-American shortstop for the Vols in 1975. 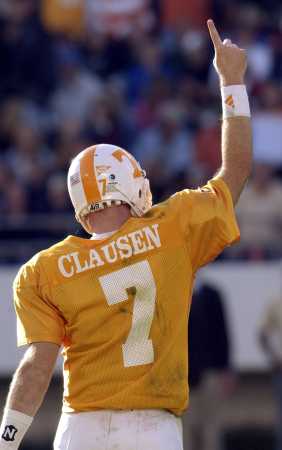 Casey Clausen is the most polarizing and, I would assert, underrated quarterback in Tennessee history. Some unjustly blame Clausen for the decline of Tennessee football. It is true that he was quarterback when the veneer of the 90s super Vols began to crack, but Clausen can’t bear all the blame for that. His numbers speak for themselves. He remains second all time at Tennessee in career passing yards and passing touchdowns. Clausen threw a stunning 75 touchdown passes to only 31 interceptions. He won 34 of his 45 games as quarterback, and took the Vols to an SEC championship game, which they lost in a fluke to guess who, Nick Saban. He never won the big one, but he was 3-1 against Alabama, 4-0 against Vandy, 4-0 against Kentucky, and 2-1 against Florida. He is the last Vols QB to win  a game in the Swamp. It is a real tragedy that this winner and phenomenal passer is mostly remembered as the guy who oversaw the beginning of the end. 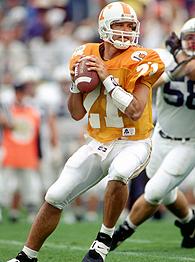 Heath Shuler is the forgotten legend of Tennessee football. People do not seem to give him the recognition they give Peyton Manning and Tee Martin, but he was every bit as effective. Shuler lead the Vols to 9-3 and 10-2 marks in just two seasons as a starter. In 1992, Shuler was predominantly a dual threat running quarterback, gashing opposing defenses on the air and over the ground. In ’93, under the tutelage of new head coach Philip Fulmer, Shuler evolved into a modern drop back passing quarterback, and finished a close second in Heisman voting. When compared to other top 5 quarterbacks, Shuler’s numbers aren’t stunning. One must consider the fact that he amassed these numbers in only two seasons, and played before the era of the high powered passing offense had fully arrived. Shuler chose to forgo his senior season and enter the NFL draft, where he was selected fifth overall by the Washington Redskins. 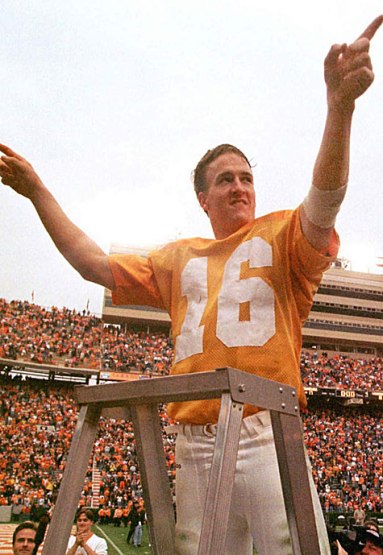 Seriously? Do I even need to write anything here? Peyton Manning is one of the greatest quarterbacks of all time. He will be a first ballot hall of famer, and is considered by some to be the GOAT, and by all to be a top 5 QB on any list. Manning holds Tennessee records for: career wins as starting quarterback, passing yards in a single season, passing yards in a career, passing touchdowns in a single season, passing touchdowns in a career, and several other SEC conference records. His 11,201 career passing record will probably never be broken at Tennessee. He won 39 games, was 3-1 against Alabama, won an SEC title, and was a runner up for the Heisman trophy in 1997. Most agree he was robbed, as the trophy was given to Charles Woodson, the only defensive player to ever win the award. Manning went on to be the #1 overall pick in the 1998 NFL Draft, and the rest is history.